Resilience of the Human Spirit

During this time of self-isolation and the unknown, let’s discuss acts of resilience of the human spirit. Have you ever heard of Emanuel Ringelblum and the Oneg Shabbat archives?

Ringelblum was a historian and community figure in the Warsaw Ghetto of Poland. The Warsaw Ghetto was established on October 12, 1940 and was the largest ghetto with over 400,000 Jews imprisoned. People suffered severely from starvation, exposure, and disease.

The hunger in the ghetto was so great, was so bad, that people were laying on the streets and dying, little children went around begging…

Food allotments were not enough to sustain life in the ghetto. Between 1940 and mid-1942, 83,000 Jews died of starvation and disease. There was widespread smuggling of food and medicines. Smuggling was an offense that could bring a death sentence.

Ringelblum and his colleagues knew that life in the Warsaw Ghetto should be documented and preserved for future generations. The persecution of Jews at the hands of the Nazis was unprecedented, and he was determined to create an historical record for future generations. This record became known as the Oneg Shabbat (In Celebration of the Sabbath). This collection was done in secret. Ringelblum and his associates collected information during the day and wrote notes in the evening. At first, reports and testimonies of Jews seeking help from self-aid organizations was collected. The self-aid organizations in the ghetto included soup kitchens, house committees, and underground schools. The archive established links with two youth Zionist organizations. 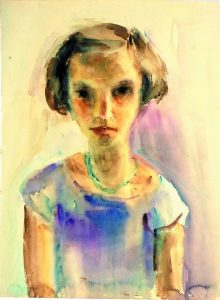 What do you see in this painting? How does it make you feel?

Gela Seksztajn was one of the best known figures in the Warsaw Ghetto. More than 300 of her drawings and paintings were preserved in the archive, along with her and her husband’s wills.

As I stand on the border between life and death, certain that I will not remain alive, I wish to take leave from my friends and my works…. My works I bequeath to the Jewish museum to be built after the war. Farewell, my friends. Farewell, the Jewish people. Never again allow such a catastrophe.

From the Last Will and Testament of Gela Seksztajn, August 1, 1942

Gela and her family were murdered during the Holocaust. 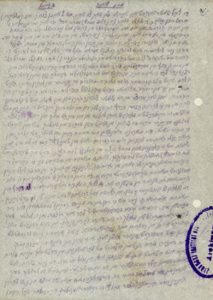 “The future historian will have to devote a fitting page to the Jewish woman in the war. She will fill an important page in Jewish history for her courage and resilience. Thanks to her, thousands of families managed to survive the horror of those days. Recently, an interesting phenomenon has taken place. In some of the house committees, women have taken the place of men.”

If you want to look at more from the archives, you can to the following: 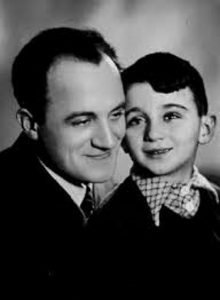 What happened to Emanuel Ringelblum?

Milk can used to store the Oneg Shabbat archives.

There is a short movie (40 minutes) about Ringelblum and the Oneg Shabbat entitled Who Will Write Our History. https://www.facinghistory.org/resource-library/video/who-will-write-our-history

It must all be recorded with not a single fact omitted. And when the time comes-as it surely will-let the world read and know what the murderers have done.

-From the Oneg Shabbat Archives 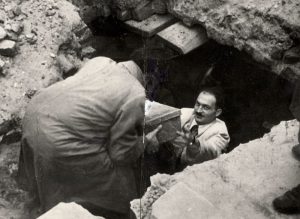 The first Oneg Shabbat archive is found in the ruins of the Warsaw Ghetto in 1946.

During this time of isolation, take the time to write your own journal of life, poetry, artwork, or maybe write a song.