At breakfast, we learned that Israeli forces had assassinated a well known terrorist in Gaza. Then rocket attacks began into southern Israel and parts of Tel Aviv. Fortunately, as of this writing, there haven’t been any significant injuries in Israel, but some buildings have been hit. Iron Dome has been about 90% effective according to a government official. We are in Jerusalem and all is calm and normal here. Children going to school, construction projects continuing and our tour continues unaltered. What amazes me is how Israelis take this in stride, and continue their lives as a statement of strength. Pray that things don’t escalate.

Usually a pretty good sleeper, I lay awake for a good portion of last night. Among other things, I was anticipating our trip to Yad Vashem today that I knew would evoke difficult emotions – feeling the sorrow of parents who lost children – and fellow human beings devastated by the darkness that some have wrought. There are so many examples of this through history and even in our lifetimes that I wonder sometimes if there will ever be an end to it. Yet, there is hope. Guided by the insights of our fabulous tour guide, Muki, we walked through the museum and improved our understanding of the context of The Shoah. We learned of heartbreaking silence and indifference in Europe and the world. As we emerged from the exhibits to a terrace with a breathtaking view of part of the city, we couldn’t help but feel some of the weight of what we saw and learned lift, if just a little. We know that there are some among us who, when confronted with tough choices, choose to do good at their own peril. Yad Vashem, using objective criteria, recognizes The Righteous Among the Nations – individuals who saved Lives during the Holocaust – and so far has recorded around 25,000 such stories. These show humanity at its best while in the face of humanity’s worst.

As Noha, a Palestinian woman, told us a few days ago at The Center For Humanistic Studies, we must learn to listen to each other’s narratives and feel each other’s pain without feeling threatened. This will allow our relations with “others” to improve in a peaceful way. Humans may be alone in the natural world in our willingness to endanger ourselves in order to help others – to speak and act at personal risk in the face of injustice. In our polarized world, we must make it our priority to understand each other and have the courage to choose to stand against intolerance at every level.

After the Museum, we travelled to Shalva, an institute which has programs to care for children with disabilities. A new 85 million dollar facility with teachers, athletic programs, physical and occupational therapy, respite care and vocational training. We could feel the warmth and see for ourselves the joy that the children were experiencing there.

We capped off the day with a tour of the Knesset and some civics lessons on Israel’s parliamentary democracy.  We saw the Knesset in session and then had a walking tour, during which we saw gorgeous giant tapestries by Chagall (which took 4 years to complete). We were warmly greeted there by Yotam Yakir, a close friend of Dani’s since grade school who is the Director of Public Relations for the Knesset. 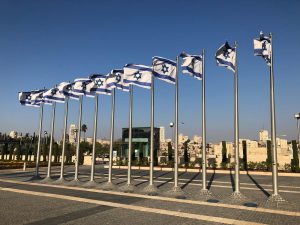 Back to the Hotel for dinner and a much needed rest. The trip has been a whirlwind, packed with great experiences. I’m looking forward to tomorrow and to getting back home – but the plane ride not so much.